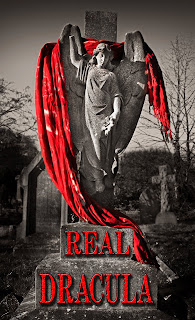 The last time I saw Dracula in Cambridge it was in Bryony Lavery’s 2005 adaptation of the story, with the count's hypnotic tones informing us that he was “searching, searching the internet”. The old technology of Bram Stoker’s original had given way to the new, leading naturally to jokes about ‘Love at first byte’. Real Dracula is also a modern take on an old story, but is a far cry from the suave aristocrat, instead eliding the traditional pre-Stoker vampire and present-day Romania into a genuinely spooky experience.

Ileana takes her English boyfriend Jonathan (echoing Jonathan Harker in Dracula) back to her rural village in Transylvania for her beloved uncle Petre’s funeral. They live in Bucharest, where they are both teachers, and this is Jonathan’s first taste of the old ways in a world far removed from the familiar, comfortable city (even if he can get a mobile signal). A stranger in a, to him, very strange land, Jonathan is bemused to find the corpse taking a central place in the home, and horrified at finding himself obliged to kiss it before leaving the room, to ward off bad luck. The bunches of garlic festooning the walls offer no reassurance.

This is a difficult situation too for Ileana, because she has grief and family history to contend with, on top of her mixed emotions at seeing her old flame, Alexandru. To make matters worse, she starts getting headaches, and gradually falls into a lethargic stupor which proves resistant to conventional treatment. Rationalistic Jonathan attributes her deteriorating state to stress, but Alexandru and family friend Dragana are convinced that the cause is Petre, walking again and preying on his unfortunate niece. Their solution is simple though shocking, but unfortunately for Jonathan he is a key player without whom it will not work.

Petre is perhaps the creepiest vampire since Klaus Kinski’s Nosferatu, but the play’s fascination hinges on whether he really does walk abroad. The answer to what is wrong with Ileana is finely balanced and exemplifies Tzvetan Todorov’s definition of the fantastic, which he defines as the hesitation experienced by a person confronting an apparently supernatural event. Petre’s appearances have a dream-like quality, so we can never tell whether they are real or a depiction of Ileana’s troubled mind. She goes missing and, when she is found, Alexandru and Dragana search for bites on her neck, but cannot find them among the scratches she has suffered in her wanderings. As she had a history of sleep-walking as a child, it is unclear anyway whether this episode was merely a continuation of that behaviour, or caused by vampiric influence. She seems to attack Jonathan and Alexandru, but is she infected, or merely expressing her psychological distress in ways familiar to her from her upbringing?

Jonathan is never sure either, and although despite protests he goes along with Dragana and Alexandru’s plan, the enormity of what he has to do leaves him with his own set of demons. If Ileana is not suffering from vampiric harassment, the act is a monstrous one. Dragana sums up the ambiguity of the situation by showing him a photograph she took when she thought she had seen a vampire. There is nothing there, so did she see something that could not be photographed, or was the whole thing an hallucination brought on by tiredness and expectation? There is no answer. For Jonathan, Transylvania becomes a kind of waking nightmare in which seemingly ridiculous superstitions may have effects in the real world, undermining his convictions. In the end, he cannot be sure what was worse – for Petre to have been a vampire, or for him not to have been. Ironically, while Ileana has drawn closer, she is for him a constant reminder of the horror.

The small cast convinces, and those with speaking parts (all but one!) maintain their accents well. Pleasant Danger Productions’ David Geasor and Paul Holloway, co-writers and producer and director respectively, have taken events which occurred in 2004 and elaborated them into a subtle and suspenseful play. The publicity’s strapline is, “What would you do to save the one you love?” For Jonathan, a subsidiary question is: “And could you live with the consequences?” Given that the play is based on something that happened so recently, the audience is left wondering how robust our everyday urban certainties actually are, and what may lurk not far beneath them.