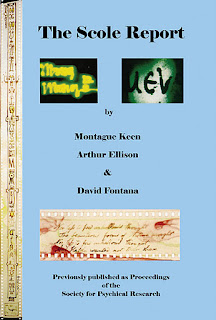 
In 1999, the Society for Psychical Research (SPR) issued a lengthy Proceedings, part of Volume 58, entitled The Scole Report: An Account of an Investigation into the Genuineness of a range of Physical Phenomena associated with a Mediumistic Group in Norfolk, England, thankfully generally abbreviated to just The Scole Report. The authors, Montague Keen, Arthur Ellison and David Fontana, had compiled the report after an investigation of the mediumship circle sitting at Scole, a village in Norfolk. The circle had been established by Robin and Sandra Foy in 1991, and by 1994 the phenomena were of sufficient interest that Keen, Ellison and Fontana, all senior SPR members with an interest in survival, began a two-year investigation, though other SPR members visited as well. The conclusion reached by all three authors was that the wide-ranging phenomena they witnessed in the “Scole Hole” were genuine and resulted from the actions of discarnate entities.

Unsurprisingly, given the wide range of opinions within the SPR, the Scole Report proved controversial even before it was issued. There was dissent among the SPR’s Council about the worth of the investigation, leading to a series of critical appendices which had to be included as a condition of publication. An anonymous donation to subsidise the printing costs helped to smooth progress. In June 1999, just prior to its release, staff journalist Bryan Appleyard wrote a long article on Scole in the Sunday Times magazine in which he made the SPR as an organisation look foolishly credulous and out of touch with reality. I wrote to Keen, as senior author, and urged at least a delay in publication until the negative impact of Appleyard’s article had dissipated, and preferably its cancellation altogether. Monty did not seem to feel that Appleyard’s article was a problem, and publication went ahead as planned, with little fanfare, though in October the Daily Mail ran a two-part series by Grant and Jane Solomon, extracted from their book written for a popular audience, The Scole Experiment.

The controversy continued in the pages of the SPR’s publications, and at a lively study day, grandly called The Scole Debate, on 23 October 1999. While Scole had its supporters, in general one had the impression that there was an air of embarrassment about the Report, and a feeling that we should put it behind us as a bad experience. The publication had been the Society’s most significant research activity for years, yet the lack of rigorous controls at Scole, and the refusal to allow infrared viewing equipment inside the séance room, implied that no trust could be placed in the results as reported.

Yet as I helped out with the SPR website’s inbox, I regularly noticed emails requesting copies of the Report from people who wanted to examine the accounts of phenomena in greater detail than that provided by The Scole Experiment, sometimes in order, so they said, to try a similar set-up for themselves. Of course the Report was long unavailable, having been distributed only to members at the time, as all Proceedings are, with only a few copies left over. Many members who had joined since 1999 would not have received one. Admittedly it can be found in the SPR’s online library, access to which is free to members, but reading such a long text on a computer screen is inconvenient.

So I thought it might be worth republishing it so that we could both fulfil our educational remit as a registered charity and promote the SPR’s name more widely. It would also show that while opinions diverged over the merits of the Report, we (that is, individual members – the SPR has no corporate views) were not embarrassed by it. It would also be a tribute to the two deceased primary investigators: Arthur Ellison, who had died in 2000, and Monty Keen, who died in 2004. It transpired that there was still some discomfort surrounding the subject, necessitating a lengthy campaign to win acceptance for the proposal, during which David himself died, on 18 October 2010, making it a memorial to all three.

After earlier attempts to find a printer who could produce the Report cost-effectively proved fruitless, David had discussed the project with Ann Harrison of Saturday Night Press Publications, who proved more than willing to take on the job. The result is a new edition, printed on demand and easily obtainable online. It is the same size as the original Proceedings, unabridged, including all the appendices which contain commentaries by Donald West, Tony Cornell and Alan Gauld, along with replies by the authors and further remarks by Maurice Grosse and Crawford Knox.

There are, however, a few minor alterations. The first is that it does not appear as an issue of Proceedings, but in a livelier cover more in keeping with a commercial paperback. (There is a precedent for this rebadging exercise – The Haunting of Borley Rectory by Eric Dingwall, Kathleen Goldney and Trevor Hall, issued as a Proceedings in 1956, was published at the same time by Gerald Duckworth as a mass-market hardback.) The list of officers and Council members in 1999-2000 on the front inside cover, and the contents of other issues of Proceedings inside the back cover, have been removed.

The second is the change from the original colour plates to black and white copies; the only colour now is on the cover. This is a pity, as whatever one’s opinion of the Scole phenomena, the images are extremely beautiful, but the decision was forced by the costs of colour printing, which would have made it uneconomical. Colour versions of the plates can be seen in the online library. The final change is a new preface by Alan Murdie, SPR Council member and chair of the Society’s Spontaneous Cases Committee, providing discussion points for an assessment of what was going on at Scole.

The Report does not cover the entire Scole experiment, as the three SPR investigators were only present at some of the sittings. For a complete account, Robin Foy’s mammoth 570-page Witnessing the Impossible is essential reading. What The Scole Report brings to bear is extensive analysis and discussion, and is a valuable resource for students of physical mediumship. Since the Scole Group disbanded there have been a number of circles attempting to obtain similar phenomena, the best known of which is probably the Felix Experimental Group near Frankfurt. Scole was an important milestone in the history of the subject, and whatever one’s opinion of what happened in that Norfolk cellar, its significance will continue.

David Fontana, ‘The Scole Investigation and the Sunday Times — A Response to Gauld & Cornell’, Paranormal Review No.14, April 2000, pp.9-12.

Montague Keen, ‘The Scole Investigation: A Study in Critical Analysis of Paranormal Physical Phenomena’, Journal of Scientific Exploration No. 15, 2001, pp.167-182.