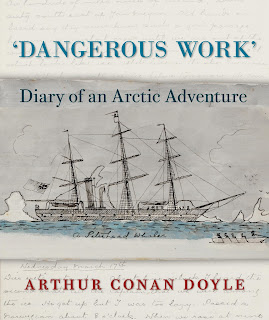 Sir Arthur Conan Doyle’s large corpus grows ever-larger.  In 2011 the British Library published his first attempt at a novel, The Narrative of John Smith, and now it has released an even earlier piece of writing, his record of a whaling trip to the Arctic in 1880.  Only a third year medical student at the time, he signed on as ship’s doctor; all British whaling ships had to carry a medical officer as a legal requirement, but clearly the level of expertise was not considered to be a determining factor.  He secured the position by chance because one of his fellow students couldn’t go and offered his place to Conan Doyle, even providing the necessary gear.  Conan Doyle took time off from his studies to supplement his hard-pressed family’s income – earning £2. 10s. 0d a month, plus a bonus of 3/- per ton of whale oil obtained – making his presence on the voyage in effect a kind of early gap year.  He was only twenty, and actually gained his majority while at sea.

The SS Hope left Peterhead on 28 February 1880, under Captain John Gray, a member of a notable whaling family (the Hope spent part of the trip in company with the Eclipse, captained by John Gray‘s brother David).  Most injuries on board fortunately were minor, though Conan Doyle experienced the first patient death of his career.  As his medical duties were not arduous, much of his time was taken up with clerical tasks, including keeping the ship’s log for the captain.  In addition to the official record, he maintained his own journal, and it is this that the British Library has reproduced.

If all he had done had been to keep the ship’s log and dress the occasional finger, it might have been a dull read.  However, he was never one to sit around waiting for something to happen, and threw himself into the life of the ship to such an extent that the captain offered to take him again the following season as harpooner as well as doctor.  Conan Doyle declined the offer, fortunately for us, given the number of times he fell in the sea.  He was comfortable with the captain, whom he admired greatly and in whose company he spent much time in this stratified community, and also with those below decks, enjoying their conviviality.

This was a formative experience for the young man.  As he later put it, he left “a big, straggling youth,” but returned “a powerful, well-grown man.”  His writing, assured for a twenty-year old, is a valuable unvarnished snap-shot of an industry that was becoming harder to sustain even in the 1880s because the level of hunting had reduced whale numbers significantly.  In fact the Hope didn’t have a great deal of luck with whales this time out, and much of the trip was taken up with killing seals.  The total haul was a poor one for nearly six months at sea, just two whales, 3,600 seals, five polar bears, two narwhals, twelve elephant seals and miscellaneous seabirds

The descriptions of how these were obtained are not for the faint-hearted, as he nonchalantly describes harpooning whales and clubbing and shooting seals.  He exhibits little sentiment, happy to shoot rare seabirds with no thought of his impact on the survival of the species.  Nothing seemed sacred, and while he may have felt a twinge of remorse occasionally, it did not stay his hand, and he happily took part in the slaughter, priding himself on being a better shot than many of his shipmates.  He saw himself as a sportsman, and listed his and the Hope’s tallies as “game bags”.  One harrowing passage describes an elephant seal “sitting on a piece of ice very little larger than itself“, surrounded by killer whales which were “striking the poor creature with their long fins, trying to knock him off his perch.”  The desperate animal leapt off the ice and made for a boat, trying to jump in it for safety, whereupon the men clubbed it.

Conan Doyle drew on his Arctic experiences in later writings, and had a tendency to elaborate and romanticise them, but this is the first draft, without risk of the embellishments that came later (though probably not immune from its own share of sailors’ exaggerations).  After a lapse of 130 years, Conan Doyle’s estate, better known for the undignified behaviour of his heirs, has now approved its publication.  The diary is beautifully printed in full-colour facsimile, displaying Conan Doyle’s clear handwriting, and revealing the stains and marks of the journey.  He was good at drawing, and frequently pasted his illustrations, some of which he later coloured, into the text.  Where they were folded over, the relevant pages have been reproduced twice, once with the picture folded to show the text, and once with it unfolded.

The volume has been edited by Jon Lellenberg and Daniel Stashower, who also edited Arthur Conan Doyle: A Life in Letters and The Narrative of John Smith.  In addition to the facsimile, they have supplied an annotated transcription, with footnotes elucidating the entries, both personal and relating to the whaling industry, and including the text of two letters he sent home while at sea (amazing to think that any kind of postal service could operate in those latitudes).  This is topped and tailed with an introduction and afterword.

The former sets the scene for the trip, and sketches its course.  The latter traces how his Arctic experiences weaved through his career, from a talk to the Portsmouth Literary & Scientific Society in 1883 (the lengthy report of the meeting in the Hampshire Telegraph is included) to articles which drew directly on the voyage, as well as less explicit references bearing the influence of that seminal trip which appear in his work.  Two articles and two short stories are included: ‘The Glamour of the Arctic’, which appeared in the Idler in July 1892;‘Life on a Greenland Whaler’ from the Strand Magazine for January 1897 (the ending seems to be missing some lines, as it makes an abrupt transition from a reference to arctic foxes to the method polar bears use to catch seals.); the early Arctic-set ‘The Captain of the Pole-Star’; and the Holmes story ‘The Adventure of Black Peter’.  Photographs and a map of the voyage complete an elegant and comprehensive volume.

The journal would have been an interesting account whoever had written it, but naturally it gains extra interest coming from the pen that later gave us Sherlock Holmes.  Conan Doyle demonstrates in embryo his burgeoning capabilities as a story-teller, with an eye for quick detail, a fluent style, and ability to evoke atmosphere.  And this glimpse of his developing style makes one wonder about a claim by the editors.  They feel that after his early stories ‘The Captain of the Pole-Star’ and ‘J. Habakuk Jephson‘s Statement‘, “Sherlock Holmes was but a matter of time.”  Conan Doyle certainly shows more literary promise here than he does in the leaden The Narrative of John Smith, but bearing in mind the vigour of his maritime exploits, and the zest of his early adventure stories, it is rather a surprise that he attempted the detective puzzles of Sherlock Holmes rather than concentrating on producing the ripping yarns that characterised much of his output.  It is fortunate for lovers of Sherlock Holmes that he did.

As a footnote, looking at the famous photograph of Conan Doyle with other members of the crews of the Hope and Eclipse standing on the deck of the Eira, the ship owned by Benjamin Leigh-Smith that they encountered on 11 July 1880, I realised that there are in fact two different shots, taken close together in time.  Both versions are included in the book, one credited to Hull Maritime Museum, the other to Hull Museums and Art Gallery. The men are standing in slightly different positions, with Conan Doyle (third from the left) much more visible in one than in the other.  Conan Doyle wrote in his journal that when photographed he was smoking a cigar, and worried that he might look “misty”, but he does not appear to be smoking in either of these.  Most likely the photographer, W. J. A. Grant, discarded that one at the time, but prints of yet a third picture may have survived. 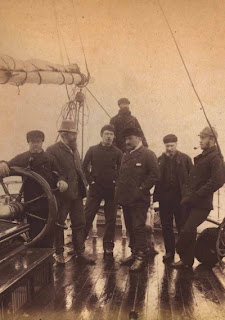 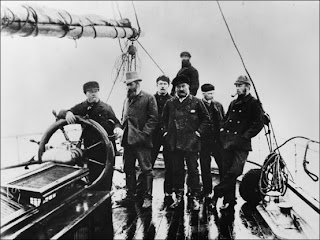