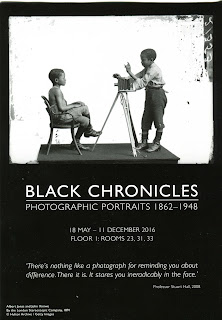 The National Portrait Gallery is currently showing a small exhibition, Black Chronicles: Photographic Portraits 1862-1948, the end date marking the Windrush’s arrival.  The black, and Asian, presence in Britain is underrepresented in the early photographic record and the studio portraits shown here indicate the diversity of the black experience, and the significant contributions black and Asian men and women made to British culture, in the late nineteenth and early twentieth centuries.

Cartes‐de‐visite and cabinet cards have been drawn from the NPG’s own collections, supplemented by large modern bromide prints taken from glass plates in the Hulton Archive.  They show people active in numerous walks of life.  There are actors, dancers (Les Ballet Nègres, the first black ballet troupe), composer Samuel Coleridge-Taylor (‘The African Mahler’), musicians, boxer Peter Jackson (‘The Black Prince’), a missionary, soldiers, and diplomats.  Ram Gopal, an early exponent of Indian dance in England, has a case to himself.

A significant portion is dedicated to portraits of members of the African Choir, a 16-strong group which toured Britain in 1891-3, including a performance before Queen Victoria at Osborne House.  They were photographed by the (original) London Stereoscopic Company, and it would have been even more interesting to have seen these as originally intended – perhaps stereoscopy aficionado Sir Brian May will take note for a future publication in his series devoted to bringing vintage stereograms to a modern audience.  The African Choir negatives were only rediscovered in the Hulton Archive in 2014, which suggests they were not considered to have much commercial potential in the past.

An album contains a number of photographs of Sarah Forbes Bonetta, a Yoruba captured, aged 5, by King Gezo of Dahomy (curiously black and Arab slavers tend to be omitted from the historical narrative in favour of an emphasis on the European-African-American triangle) but a British naval officer, Captain Forbes, persuaded the king to offer the girl to Queen Victoria as a gift: her surname was derived from the name of Forbes’s ship.  She became a society figure in England after the Queen paid for her education and became her godmother. At the other end of the social scale, Ndugu M’Hali, known as Kalulu, was servant to Henry Morton Stanley on his expeditions and the inspiration for his 1873 book My Kalulu, Prince, King and Slave: A Story of Central Africa.  He was given to Stanley by an Arab merchant, and Stanley paid for his education.

A series by Benjamin Stone records visitors to the House of Commons: a sergeant and three privates of the King’s African Rifles, a delegation of Basuto chiefs, South Nigerian Regiment ‘gun carriers’.  Various individuals connected with the Raj are depicted, from Duleep Singh, Maharaja of Lahore, the last Sikh ruler of the Punjab who was exiled to England, to Dadabhai Naoroji, the first Indian Westminster Member of Parliament.  Demonstrating Africa’s exoticism in British eyes, in 1905 half a dozen pygmies were brought to England and performed to large audiences for two years.  They were photographed by Stone during a visit to the Commons.

There is much to think about in the exhibition, even though it is a small slice of what could have been shown.  Mounted by the NPG in collaboration with Autograph ABP, an arts charity, it constitutes part of a three-year archival research programme, The Missing Chapter, supported financially by the Heritage Lottery Fund.  The Missing Chapter’s goal is to ‘to augment the photographic narratives of migration and cultural diversity in relation to Britain’s past, and disseminate a visual heritage that is fragmented and dislocated.’  This is a laudable aim, if inelegantly put, and Black Chronicles fulfils it well.  My only criticism is that spreading the content over several rooms dissipates its impact.  The main section, in its own space, has a powerful effect, with large prints imposingly presented on black-painted walls; but the other elements are just a couple of cases sited in general galleries, and are fiddly to find.  It feels like a loss of confidence by the gallery’s management.

Black Chronicles runs 18 May - 11 December 2016.  A conference accompanies it, The Missing Chapter: Cultural Identities and The Photographic Archive, at the NPG on 21 October 2016, marking the culmination of The Missing Chapter project.
Posted by Tom Ruffles at 15:43 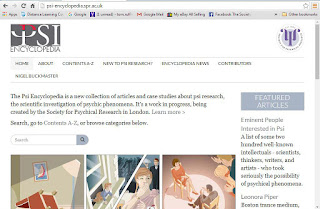 As I know from my own experience, it is unwise to rely on Wikipedia for anything psi-related, driven as it is by pseudo-sceptics determined to cast the subject in as negative a light as possible.  This is extremely detrimental because of Wikipedia’s status as the default online knowledge resource.  Craig Weiler’s book Psi Wars: TED, Wikipedia and the Battle for the Internet addressed the unsavoury business of those antagonistic to psychical research distorting content associated with it.   He eloquently showed how a core group, ‘Guerrilla Skeptics', aided by a number of independent editors sharing its general outlook, had between them rendered Wikipedia’s psychical research and parapsychology pages untrustworthy.

That is why the SPR’s new Psi Encyclopedia, which has just been launched in tandem with its new website, is to be welcomed.  Unlike Wikipedia the undertaking is not crowd-sourced, a method that is fine in theory but unfortunately gives the upper hand to those who have most stamina pressing the delete key, to the detriment of balance.  Rather it takes the form of invited articles, often lengthy and detailed, written by experts who, unlike many Wikipedia contributors, are named.  They have endeavoured to present a rounded picture, acknowledging fraud and error where demonstrated, but minus the reflexively negative agenda so damaging to Wikipedia’s coverage.

The encyclopaedia’s ‘about’ page lists four different types of entries: there are broad overviews; articles breaking those overviews down into smaller themes to be examined in greater depth; case studies; and lists.  These categories combine to provide information to suit a wide range of needs.  Apparently at launch the site’s total word count was half a million words, with a lot more to come.  A very useful section is ‘New to Psi Research?’, describing major areas and linking to specific articles.  As someone who regularly handles students’ enquiries I anticipate that the encyclopaedia is going to make my job a lot easier.

One may not agree with everything in it – psychical research is a lively affair after all – and those who are hostile will naturally moan about a lack of ‘balance’ (as they see it, i.e. not conforming to their particular view); but one can be confident that at least the information has been carefully compiled to be as accurate as possible and is designed to inform rather than mislead.  The editor has provided a contact form and will be glad to receive feedback, suggestions for additional topics, and offers from suitably qualified writers to contribute.  This is a work in progress but early comments have been overwhelmingly positive, and in the years to come it will undoubtedly prove to be the standard source for reliable online information on psychical research.  Project funding came from the late Mr Nigel Buckmaster, and the entire field owes him a huge debt for enabling the Psi Encyclopedia to become a reality.
Posted by Tom Ruffles at 18:45 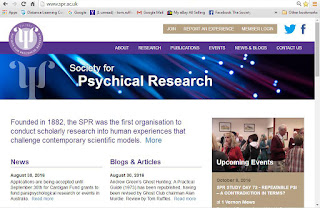 As of 5 September 2016 the Society for Psychical Research has a spanking new website, though sharing a number of similarities with the old one.  It has the news section; listings for forthcoming Society events (still irritatingly termed ‘upcoming’); information on the SPR’s publications; abstracts of the Journal’s articles; information on research; details of books recently published in the field; and links to the online library (holding the complete contents of the Journal, Proceedings and the magazine Paranormal Review).  You can learn about the organisation and how to join it, and report a personal experience.  All the basics from before are present, but there is more.  New additions include provision for blogs and articles, greatly increasing the amount of content.  The Society’s Twitter feed, which I run, now appears on the front page.  The appearance too has undergone a radical makeover.  More colour has been introduced – a fetching lavender-based design, with links to some areas represented by pictures.  There is improved optimisation for mobile devices.  The result is a more attractive and flexible offering than before.

The old website had served the SPR well for nine years but it was generally regarded as dated, so this is a welcome refresh.  In fact, looking at versions as preserved by the ‘Wayback Machine’, it is remarkable to see how the site has evolved since its first archiving in 2001.  In 2007 extensive revisions were instituted under the direction of Dr Zofia Weaver.  The SPR’s Electronic Communications Committee worked hard to expand the content in order to make the site a major source of information about the subject and the Society, though we never achieved the ‘website of websites’ I had envisaged; perhaps that ambition was unrealistic.  We did lose the bright orange colour the original website had sported, adopting instead a more restrained palette.

The most important change in the latest incarnation is the addition of the much-anticipated online encyclopaedia, funded from the exceedingly generous Buckmaster bequest.  There have been complaints for a long time that Wikipedia’s treatment of those areas covered by the term psychical research is unsatisfactory, indeed biased to the point of being misleading and heavily slanted to cast the entire subject in a negative light.  The SPR’s encyclopaedia works on a different model, consisting of invited articles solicited from experts on a wide range of topics.  This project is still growing, and is not expected to be complete for several years, but from the start it should prove to an invaluable – and hopefully reliable – source of information.

One slight personal hitch has arisen with the new website.  I had added a large amount of material to the old one, mostly book reviews plus some news items.  My reviews have been transferred but the URLs have changed, which means that it is no longer possible to access them in their new locations directly from the bibliography in my blog by clicking the links.  I may add them to my book blog in due course, but there are a lot so it would be quite a task.  In the meantime they can be found by going to the SPR website and using the search box within the new publications area, putting in either publication title or author.  Inserting my name will bring up all the books I have reviewed.  (At present there is no general search box for the entire website.)

Such minor issues aside, a lot of work has gone into the new venture under the supervision of Robert McLuhan.  In its expansion it has more closely approached the idea of the ‘website of websites’ I had envisaged the last time we undertook a major revision.  I am sure that the revamp will generate a great deal of interest, and in so doing be a major vehicle for the SPR to promote itself, and stimulate interest in psychical research.
Posted by Tom Ruffles at 12:40