Jack the Ripper: The Casebook - A review 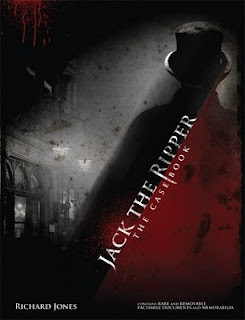 Jack the Ripper: The Casebook, by Richard Jones

In a crowded marketplace even the keenest student of Jack the Ripper has to ask if yet another book is worth adding to the groaning shelf devoted to those bloody weeks in the autumn of 1888. The answer in this case is an equivocal yes - not for the text, which is basic, but for the facsimile documents that put me in mind of the old Jackdaw folders, information combined with replicas of contemporary papers.

The writing is straightforward and presented in a logical sequence, starting with a brief overview of social conditions in London’s East End, the economically precarious nature of life in which created a large population of prostitutes, and a tendency to scapegoat the influx of Jews escaping pogroms in Eastern Europe. Brief descriptions of the major police personnel involved in the investigation are followed by accounts of what are generally regarded as those killings attributed to the Ripper, set in the wider context of Whitechapel murder.

Interspersed in the descriptions of the deaths are sections recounting the police investigation and the growing anxiety of the local population. Jones sketches in the backgrounds of Mary Nichols, Annie Chapman, Elizabeth Stride, Catherine Eddowes and Mary Kelly, rather than leaving them as semi-anonymous bit-players in the drama. A section asks if the Ripper possessed medical knowledge, another examines the murders as a catalyst for social reform.

Individuals suspected at the time are described, along with weaknesses in the evidence against them, as are those who have come under suspicion in more recent years, such as Patricia Cornwell‘s allegations against Walter Sickert, the’ James Maybrick’ diary, and Francis Tumblety. The Royal family and freemasons get their name checks and are promptly exonerated. Very brief overviews of why the police didn’t catch the Ripper, the ambivalent attitudes of the press and what the area looks like now round things off.

With the foregoing are eighteen contemporary documents, each keyed in to the relevant section. These range from reports on the individual murders, some of the various cards and letters sent to the police in the name of Jack, a handbill, to newspaper reports, including a page from the ‘Illustrated Police News’, the date of which is not given (6 October).

The book’s presentation is gimmicky, glossy paper with fake stains and fingerprints, sidebars made to look like newspaper clippings, with pretend staples or paperclips to give the impression that the reader is perusing the original file, and therefore closer to the experience of what it would be like to handle original paperwork. The ‘stains’ give the pages a magazine feel, and are similar in style to the presentation of ‘Ghost Voices’ magazine: lavishly illustrated, short bursts of easily-digestible prose, the whole given a distressed veneer with stains and marks for atmosphere (though the Casebook‘s pages are always legible despite the treatment).

The photographs, which take up about half of the space, are generally well chosen but occasionally there is a sense that the picture editor was struggling to find something relevant to the topic. The cover should have had a warning that some of the post-mortem illustrations are graphic.

The book is fine as far as it goes but feels like an opportunity lost. Jones knows the material and has produced a good primer which will help to orient the reader new to the subject. But many enthusiasts buying the book for the documents will find the text perfunctory; at only 64 pages, all the sections are given only a double-page spread which means that nothing can be covered in depth.

Yet the documents themselves are of limited value as they are hard to read. Transcripts would have helped enormously, as it is very few will manage to plough through all the reports. Also, the documents are housed in very flimsy pockets which are delicate and will crease and tear with anything other than light use. The package has a natty magnetised flap to close it, which presumably is designed to hold the pockets in place when the book is shelved so that the weight of the contents does not weaken them.

The overall impression of the Casebook is that it is elegant and beautifully designed, but not functional, to be admired rather than used as a research tool. Really, there is no need to have physical copies of the documents, as full-colour illustrations would have served just as well. Jack the Ripper: Letters from Hell by Stewart P Evans and Keith Skinner managed to combine colour illustrations (and more clearly than Jones’s facsimiles, which have lost some definition in the reproduction) with transcriptions, making it a model of its kind.

Jones has produced a clear introduction to the case and the issues it throws up, but it does not, provide, as the introduction claims, “everything you need to understand and launch your own investigation into the mystery of Jack the Ripper”. The would-be Ripperologist needs rather more than these materials allow to be able to do that.