This Record is not to be Broadcast – A review 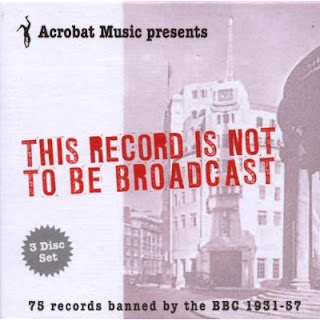 It is a fair bet that most casual listeners to this three CD set from Acrobat Music, subtitled “75 records banned by the BBC 1931 – 57”, will be surprised to learn that some of the tracks were ever banned, and for what will often seem now to be ridiculous reasons. The one that surprised me most was the sickly Deck of Cards, banned because the BBC thought it mocked religion. In my youth it formed the basis of a sketch, using large cards thrown onto a sheet in silhouette, which was performed at more than one show put on by my local Boys’ Brigade company, an organisation not noted for deriding religious belief.

Fortunately for those baffled by what there might be to object to in some of these songs, there is an accompanying booklet which contextualises the reasons for the bans (from which we learn that several included actually were not banned after all, and one song is dated 1958, despite the subtitle). Compiler Spencer Leigh has combed the BBC Written Archives Centre’s files to track the pronouncements of the Dance Music Policy Committee and other decision makers who determined what the ears of the British listening public could and could not be exposed to, such as the Head of Light Entertainment and that noted musicologist, the Head of Religious Broadcasting.

Unsurprisingly the BBC does not emerge with credit because though one can see a justification for some of the decisions made by the self-appointed arbiters of taste, others are extraordinarily trivial or eccentric. The old-fashioned paternalism towards the lower orders, which is what lies beneath many of the bans, indicates that moral standards are far from rigid, and the sorts of issues that exercise the censors of one day will almost certainly appear quaint to the consumers of the next, and those who took their task so seriously become objects of ridicule.

Sex and drugs were unsurprisingly part of the checklist of the unacceptable, along with product names and morbid references to death. But in our post-modern world where ‘borrowings’ are generally seen as unexceptional, it seems odd to find tunes banned merely for souping up motifs from the classics. The decisions concerning religious issues also seem strange to a modern audience, revolving around such issues as bogus sentiment or unsound doctrinal interpretation. The detection of these theological subtleties must have required a finely-tuned sense of the spiritual, yet such arcane issues seem to have caused as much fuss at the BBC as if the proffered disc had described the burning of nuns.

So how successful is this as a compilation? Well, like all anthologies inclusion is dictated as much by access to rights as it is by the wish to present the best, or the most representative, examples, which gives it an arbitrary feel (no Max Miller!). There is a lot that is readily accessible elsewhere, hence cheap to use, and some dull stuff that is obscure for reasons other than for having been refused airplay by the Beeb a few decades ago.

If near the knuckle period material is what you want, rather than a batch of tunes that happened to find themselves persona non grata on the turntables at Broadcasting House for what are now considered trifling reasons, I would recommend Living Era’s ‘Listen to the Banned: 20 Risqué Songs of the 20s and 30s’. This covers a period relatively neglected by ‘This Record is not to be Broadcast’, which contains few tracks from the 1930s. In fact, well over half date from the 1950s, which not only reflects the larger market for music post-war, but also an increasingly forceful pushing at the envelope of acceptability. ‘This Record’ is a pleasant enough compilation and it always good to see archive recordings made available to a modern audience. Rather sadly though, not many of the tracks would make your maiden aunt colour even slightly.