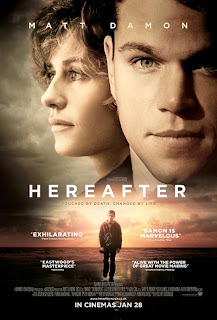 Clint Eastwood does not seem the sort who would spend a lot of time bothering with metaphysical speculation, and it is to his credit that he has made a film which, if it does not always perform satisfactorily and often lacks subtlety, does have a heart and will give the attentive viewer something to think about. Hereafter has three separate strands, each featuring an individual who has to face issues of life after death. Marie (Cécile De France) is a Parisian intellectual author and television presenter caught by the Boxing Day tsunami in 2004 who has a near-death experience which causes her to question what is important in life.

George (Matt Damon) has given up the life of a well-paid psychic, considering his gift a curse, and works at the San Francisco docks, resisting pressure from his mercenary brother to return to his old trade. Marcus is a twin in London whose brother Jason is killed (the pair played by Frankie and George McLaren). All three thus have a connection with the afterlife of one kind or another, but the difference is that whereas Marie and Marcus are searching for answers, George is running away from them because the grief he experiences through others weighs too heavily on him.

Despite the title, this film is not about the hereafter, but about the ways in which we deal with death and loss. There is no clear depiction of life after death, only a shadowy sense that those who have died have passed over (the little girl who was swept away with Marie can be glimpsed briefly, indicating that she did not survive). Even George, with his long experience of talking to those on the other side, has to confess that he has no idea what it is really like.

To get out of the way the things that annoyed me about this film, which were many. You would not be allowed to wander around a hospice unescorted and see people dying in rooms with the doors open. A book entitled Hereafter: A Conspiracy of Silence implies that nobody is discussing near-death experiences and it requires a courageous mainstream author and personality to bring them to the attention of the public, whereas the NDE is an extremely popular subject at present, with numerous books devoted to it. A publisher would not give an unknown telephone caller the name of the hotel where one of its authors was staying.

There’s more. No crematorium would allow a funeral to take place with the party for the next service standing at the open door waiting to come in (and I doubt if even the most harassed clergyman would be quite as insensitive as this one, especially as the funeral is for a child). You would not be given the ashes directly after a funeral; it takes time to burn a body and put the remains through a cremulator. You would probably not be given an urn without a box to hold it. Even with £200 in his pocket, it is implausible that a primary-aged schoolboy would be able to visit a platform medium, have a private reading with another psychic, and visit a bizarre Electronic Voice Phenomenon researcher in a day (a montage designed to show us that they are all either deluded or outright frauds - the platform medium in particular is a crude caricature who would not last five minutes in front of the most obtuse audience with such blatant fishing).

There’s still more. Given how many people are involved in taking a film from script to screen, you would have thought that someone would have noticed that having a Dickens expert say that his last novel was Edward Drood was ridiculous. The intersection of the three strands of the story at an Alexandra Palace book fair feels contrived. Anyway, this London is not like the city I know (though Eastwood is not alone in making screen London feel like it exists in a parallel universe to that occupied by the real one). Clint’s music is bland. And the excessive amount of product placement in the film meant it had probably largely paid for itself before a foot was screened.

It could be argued that these are superficial elements which do not affect the deep meaning of the film, but they are distractions which weaken its impact. The sloppy writing is surprising given that the script was penned by Peter Morgan, who has plenty of experience, though on more down-to-earth themes. Eastwood apparently likes a certain unpolished spontaneity in his scripts, but this one is positively ragged and would surely have benefited from rewrites to iron out some of the implausibilities.

Those niggles aside, there is much to like. The tsunami which opens the film is gripping and stomach-churningly realistic. The pace of the rest of the film, while slow, allows us to get to know the characters. Performances generally are first-rate, especially Cecile De France as the TV interviewer whose professional and personal lives unravel after her near-death experience. Matt Damon appears convincingly lonely and buttoned-down, and the scenes in which George listens to audio books utterly sad (his Dickens enthusiasm is endearing, if unlikely). The adult evening class where he learns Italian cooking and gets on with a fellow student are nicely observed, their blindfolded tasting sessions have a gently erotic quality. Only Marcus fails to demonstrate the required degree of emotion, and in the key scene in George’s hotel room whichever brother it is cannot convey the grief required to make the scene as powerful as it could have been if, say, the Haley Joel Osment from The Sixth Sense had been sitting in the chair.

When he is persuaded to give readings, George at first appears to be supplying fairly general statements, allowing the sitter to read meaning into a description. But the one he gives Marcus is clearly specific and accurate, which indicates that George does posses psychic abilities of some kind. And when he accidentally touches Marie, he has a vision of her under water as she was when enveloped by the wave. The film though does not explore the possibility that the information George receives which purports to come from the deceased might instead come from the minds of the living, even though in those readings we see him give, he never supplies more information than he could have gleaned from the client‘s mind, added to inferences he could have made himself. The default position is that George has a link to the dead, even if it works better at some times than it does at others. There is also a sense with Marcus that George is partly ad-libbing purely to comfort the distressed boy.

For all its weaknesses, Eastwood has given us a thoughtful analysis of our relationship with life after death. Despite the vision that Marie experiences, the film seems to be saying that it is relationships in this life that are paramount. The dead Jason tells Marcus through George that he cannot expect Jason to look after him anymore, and our final view of Marcus is in the arms of the one significant person left in his life, and facing an optimistic future. The general feel of the film is one of compassion for people in difficult circumstances who do not always make the right decisions. It seemed entirely fitting that the scene featuring the platform medium was filmed at Conway Hall, the home of the South Place Ethical Society, which is a leading force for humanism.

The ending in particular is beautifully done. Touching another person for George had always entailed accessing the person’s grief, and was therefore a barrier to close emotional involvement. Now he realises that he can finally connect to another person because she has come to terms with her experience and found an inner peace. We sense that he too will find happiness in this life, which one suspects is what counts for Eastwood, whatever happens to us afterwards.