Lines in the Ice: Seeking the Northwest Passage 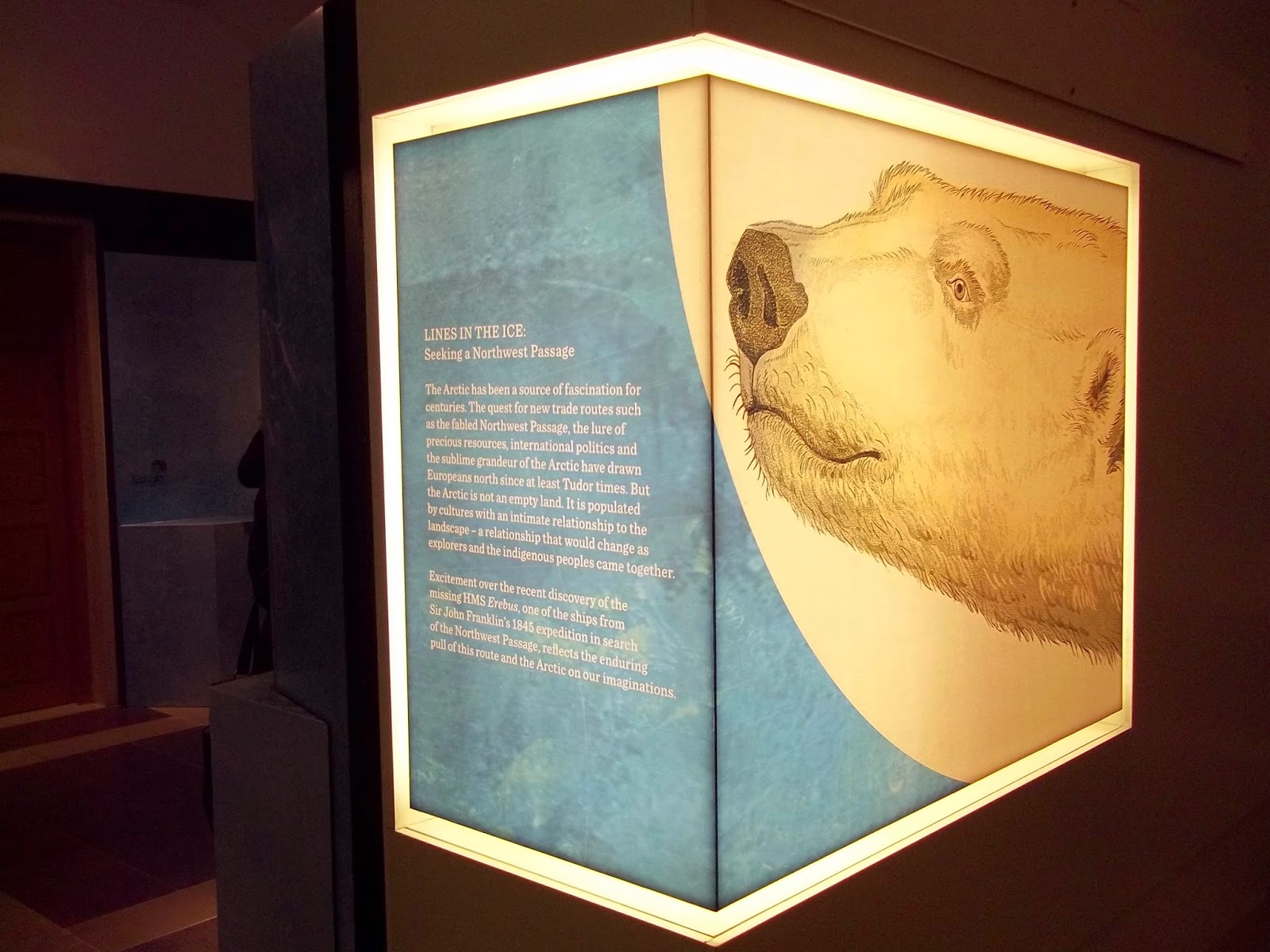 Lines in the Ice: Seeking the Northwest Passage (or a Northwest Passage according to one title panel at the gallery’s entrance) is the current British Library exhibition in what is now called, slightly misleadingly, the ‘Entrance Hall’ rather than the more specific Folio Gallery, the Folio Society presumably having ceased its sponsorship of the space.  Lines in the Ice charts the European – notably Norwegian, Russian, Dutch, but principally English – fascination with the Arctic over the course of four hundred years and the often fraught relationship with the region,  and with its inhabitants whose way of life has been put under increasing pressure since contact was first made.

The displays particularly focus on the search for the Northwest Passage linking Atlantic and Pacific, a venture full of drama and tragedy that reflects the outward urge of Europeans at a time of trade and colonial expansion.  Curated by Philip Hatfield (the British Library’s Canadian Collections) and Tom Harper (Map Library), there are some wonderful items: books, maps of increasing accuracy (including Charles II’s own atlas), letters, photographs, and moving images.  The overall design is thoughtful, the information panels’ colour scheme evoking the icy Arctic environment.

There are some well-known names connected with the region here, starting with the Elizabethan explorer Sir Martin Frobisher, shown in a confrontation with Greenland Inuit in the 1570s.  The bulk of the exhibition though is devoted to the nineteenth century efforts at Arctic exploration, reflecting British maritime dominance, the most famous name from that period of course being Sir John Franklin.  He and his ill-fated expedition, as well as those that set out to discover his fate, have a central place in the display.  There is also film of the great Roald Amundsen, and not forgetting Father Christmas in the roll-call of famous figures associated with the Arctic, who it turns out has been issued with a Canadian passport.

Inuit accounts of the European presence were often dismissed when they did not suit the prevailing narrative, such as stories of cannibalism among Franklin’s men reported by John Rae from Inuit eyewitness accounts, later found to be true.  Inuit identity and culture tended to be ignored by European interlopers, their existence – if noticed at all – seen as irrelevant, but the exhibition ensures that we are reminded of their presence.  It is significant that Amundsen’s success in navigating the Northwest Passage in 1903-6 was partly reliant on local Inuit knowledge.  He was always ready to learn from those with greater experience.

The fate of Franklin’s expedition highlights the Gothic feel of the region, one that Shane McCorristine has examined.  Even before Franklin, though, Mary Shelley had seen the Arctic’s uncanny potential in her 1818 novel Frankenstein.  The flipside is the attempt to impose an element of domesticity on the alien landscape, as can be seen in a print of crew members playing cricket in an 1824 book by Captain William Parry.  One of the most striking images in the exhibition is an 1848 illustration of Peter Halkett’s very English combination inflatable dinghy and cloak, with an umbrella that doubled as a sail – except how much use would an umbrella be in such a cold place?

Sound is not forgotten as an aid to evoke atmosphere, and it expands the visual experience.  Part of the display has a soundtrack of surf and seabirds to accompany the exhibits.  There are also headphones where one can listen to recordings from the natural world: icebergs as they sound underwater, the echolocation of a male sperm whale, and the subsurface vocalisations of bearded seals and walruses.

Recent decades are dealt with somewhat cursorily at the end, perhaps because this is a story that is still being written.  The recent discovery of the whereabouts of Franklin’s HMS Erebus has fuelled interest in the Arctic, and the exhibition comes up to date with the political manoeuvrings for territory and access to resources as illustrated in maps issued by the Russians and Canadians.  The demarcation problem will become all the more pressing as the ice continues to recede and, given Russia’s current attitude to diplomacy, is a potentially significant international flashpoint, while at the same time the Arctic is increasingly important to environmentalists as a symbol of the destruction of the planet in the pursuit of profit.

The Arctic is a place of breath-taking beauty, danger, and wonder.  It has long loomed large in our imagination, and while it is right to be concerned for its future as a site of national rivalries and degradation from climate change and commercial exploitation, it is worth being reminded of those who risked, and often lost, their lives as they went West in pursuit of a passage to the East, becoming part of legend in the process.  Lines in the Ice is a worthy tribute to their endurance.

The exhibition has been extended and closes on Sunday 19 April 2015.
Posted by Tom Ruffles at 15:40