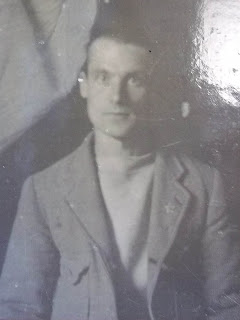 In March 2010 I was in Cambridge University Library examining a trio of albums containing a large quantity of spirit photographs taken by Ada Deane, dated 1920-23.  These albums are part of the archives of the Society for Psychical Research and contain photographs in which sitters are shown with alleged spirit extras.  While leafing through the first album I was struck by one subject who reminded me of the Anglo-Austrian philosopher Ludwig Wittgenstein.  In the drapery above the sitter’s head can be seen a spirit face.  Most of the sitters in the albums are ordinary members of the public, though Sir Arthur Conan Doyle does make an appearance, so it seemed odd that someone like Wittgenstein would have consented to have his picture taken in such circumstances.

There were some items in favour of this being Wittgenstein, but more against.  Wittgenstein was born in 1889 so would have been about the right age (c31-34).  The hairstyles were similar, and the Deane subject’s jacket possibly had a continental look.  He was wearing a jumper, and while I have not found a photograph of Wittgenstein so attired, he did dress casually, without a tie; a jumper is the sort of bohemian garment he might have worn.  Above all the mystery man does not look like a typical Deane sitter and stands out.

Against this, Wittgenstein lived in Austria after the First World War until 1929, when he moved to Cambridge. The hairstyle is ordinary enough to make it less than compelling evidence.  Most significantly of all, would he have sat for Deane? I asked a friend at the Institut für Grenzgebiete der Psychologie und Psychohygiene in Freiburg for his opinion and he was sceptical that Wittgenstein could have even met Deane, on the grounds that Wittgenstein would have loathed the idea of spirit photography. But we don't know the circumstances in which it was taken.  One does not need a Spiritualist motivation to sit for a spirit photograph, it may be regarded as an intriguing experience: Wittgenstein could have decided to try the process from a sense of adventure, or perhaps he had suffered some trauma during the war and thought that it might have therapeutic benefit.

The following year the University of Cambridge, supported by the Austrian Cultural Forum in London, mounted a small exhibition on Wittgenstein and Photography in its Photographic and Illustration Services to mark the 60th anniversary of his death (later shown at the London School of Economics).  The display included, as well as portraits of him, an exploration of his wider involvement in photography and the connections to his philosophy.  Before I visited it I thought I would see if others saw any resemblance between Wittgenstein and the man in Deane’s photograph.  I had taken a handheld copy and put a cropped version (minus the spirit extra) on Facebook, asking simply if anybody recognised the individual.  Only one person responded (the writer Anthony Peake), and he said he thought it bore a resemblance to Wittgenstein.  The cropped version is at the top of this article.

I had hoped that I would see a portrait of Wittgenstein at the Cambridge University exhibition from the same period as Deane’s photographs to help me decide either way, but unfortunately there was nothing dated about 1923.  One from 1930, when he was a Fellow at Trinity College Cambridge, bore a vague resemblance, and was probably what sprang to mind when I first saw the Deane album.  He is wearing a plain jacket, though of a different style, and while his eyes look more recessed and his eyebrows darker than the Deane sitter, differences in illumination could conceivably account for such discrepancies.  A photograph included in the catalogue from 1920 certainly does not resemble hers, but it is worth bearing in mind that he seems to have aged rather fast over the decade so it is not impossible that he could have looked so much older three years later.

As the exhibition’s title suggests, Wittgenstein was fascinated by the medium, both as a practitioner and theoretician.  One project included in the show was the construction of a composite photograph made some time during the 1920s, inspired by the work of Francis Galton, which blended his own features with those of his three sisters.  Despite the firm opinion of my friend at IGPP in Freiburg, it felt entirely possible that someone interested in the way images can be manipulated to make a new reality might also be interested in how they can represent the unseen in spirit photographs.

Leaving aside comparisons between the Deane photograph and portraits of Wittgenstein taken at various times, the key question was whether he was actually in England during the period covered by the albums.  An email to the Cambridge Wittgenstein Archive in January 2016 appeared to lay the matter to rest.  After the First World War ended he travelled outside Austria only twice before 1929.  In 1921 he went to Norway, and during the summer of 1925 he visited John Maynard Keynes in Sussex and his friend William Eccles in Manchester.  He finally moved to Cambridge in January 1929.  So he was outside England entirely between 1920 and 1923.  It is possible that there was an undocumented trip between those dates, which seems most unlikely, or that the date in the Deane albums is incorrect and they include photographs taken after 1923, and Wittgenstein dropped into Deane’s studio in London en route to Sussex or Manchester.  Either suggestion feels like clutching at straws.

To conclude, my suspicion is that while I really do wish I had stumbled across a hitherto unknown photograph of Wittgenstein sitting in Ada Deane’s studio, the answer to the question posed in the title is ‘probably not’ as the weight of the evidence is strongly against the possibility.  But you never know, an authenticated picture of Wittgenstein might turn up in which he looks unambiguously the same as the Deane sitter, though the puzzle would still remain when he did it, and why he was there.

Acknowledgement:  I would like to thank the Wittgenstein Archive in Cambridge for the speedy response to my enquiry asking about his travels outside Austria between 1918 and 1929.
Posted by Tom Ruffles at 16:32