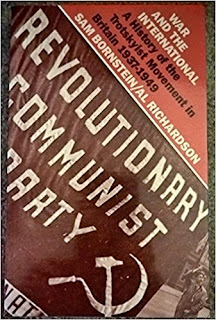 Recently I received an alert from the Red Mole website (subtitled ‘A modest contribution to the history of the Fourth International in Britain’, which frankly is far too modest) headed ‘Fancy a pint, comrade?’  The post reproduces a crudely-printed ticket made for what it calls a ‘Karl Marx Booze Up’.  It continues: ‘October 1968 – A competitive pubcrawl to celebrate Karl’s 150th birthday – organised by South West London Vietnam Ad-Hoc Committee and believed to be the brain-child of one Al Richardson.’  The epic pub crawl began at Centre Point and took in a couple of dozen pubs before finishing in Hampstead.  The purpose was two-fold: to celebrate the 150th anniversary of Marx’s birth, and to raise funds for the South West London Vietnam Committee.

The idea, according to the ticket (no. 82), was to sink an alcoholic drink in every pub on the route, all of which existed in Marx’s time and were on the route Marx and his German émigré friends took on their own pub crawls.  The person to complete the course and finish a pint the fastest in the final pub would receive a ‘unique prize’.  The ticket proclaims: ‘Victory to the N.L.F.’, i.e. the National Liberation Front, or Vietcong.  To enter cost ‘half a dollar( 2/6)’;  five bob was often referred to as a dollar, reflecting times with a more favourable exchange rate.

An update to the post says the mystery prize was the brass door knocker from the house Lenin lived in in 1905, which Richardson rescued from a skip while the house was being demolished.  The winner was Peter O’Toole of the Irish Workers’ Group (so presumably not the Peter O’Toole).  I wonder where the door knocker is now.  Sadly I would have been too young to join them, but it must have been quite a sight.  I suspect there was a lot of singing as they made their increasingly wobbly way northwards.

Many people talk about that teacher who had a profound effect on their education going beyond school and helping to shape their lives.  I think I can identify two:  Someone called Ron Barrett, who taught me English at Battersea Grammar School, and the ‘one Al Richardson’, instigator of that long-ago excuse to get pissed, who was my history teacher at Forest Hill School, where he was known as Alec rather than Al.  His Wikipedia page describes him as a ‘British Trotskyist historian and activist’, which he was, but he was as well a professional Yorkshireman with an often blunt manner and an infectious enthusiasm.  He could also be very funny.

I had left Battersea Grammar (actually in Streatham) at 15, tried something that didn’t work out, lost a term’s schooling, and started at Forest Hill in January 1973 with two terms of the fifth form left.  I had been down to do a history O level at my previous school but the syllabus was different and I wasn’t able to carry on with the course.  So for two terms I sat in class with Alec’s prescribed reading, a straight diet of Isaac Deutscher.

Clearly Deutscher had a huge significance for Alec as it was reading the monumental three-volume biography of Trotsky – indeed a magnificent achievement – which caused Alec to leave the CPGB and join the Trotskyist Socialist Labour League, resign his lectureship at the University of Exeter and become a teacher at Forest Hill.  There he left the SLL and joined the International Marxist Group, but by the time I knew him he had resigned (not been expelled, as some reports have it) from the IMG because he objected to its increasing post-1968 obsession with student activism.  Ironically in the early 1980s it turned to Labour Party entryism, and Alec had always argued that the Labour Party was the key expression of working class politics and should be the focus of revolutionary activity.  He later joined and left the Revolutionary Communist League, then concentrated on research and writing.

He did not strike me as much of a party man, which may go some way to explaining why, doctrinal issues apart, he never stuck with any of the groups he joined.  There is though no doubting his commitment; in May 1968 he hitch-hiked to Paris to participate in the student protests, where he must have cut a distinctive figure.  He became a historian of the movement, interviewing Trotskyist veterans, and a prolific author and polemicist.  His major achievement was the three books he produced with Sam Bornstein: Two Steps Back: Communists and the Wider Labour Movement, 1939-1945 (1982), Against the Stream: A History of the Trotskyist Movement in Britain 1924-1938 (1986) and The War and the International: A History of the British Trotskyist Movement 1937-1949 (1986).  In 1988 he founded the magazine Revolutionary History.

I have very fond memories of him, such as joking in class that it was appropriate for A J P Taylor’s Origins of the Second World War, published by Penguin, to have an orange spine as it was essentially a work of fiction.  He had studied ancient Greek and told the story of visiting Greece and using it, to the bemusement of the locals.  He stressed the modern Greeks were nothing like the ancient ones, so I don’t think he was too impressed by those he came across.  He had had a first in theology from Hull, but kept that quiet, and was of course sniffy about religion; I first heard the phrase ‘four-wheeled Christians’ from him.  He loved ancient Egypt, and told us it was his favourite period in history.  He was a tad sexist, and did not seem impressed by women, I suspect because he considered them lacking in sufficient class consciousness.  Appreciations of him after his death drew attention to his objection to sectional interests on the left, including feminism, anything he thought would dilute the workers’ struggle.

Sixth formers taking history would be invited round to the house where he rented a room from another teacher, and while we were supposed to be preparing for A levels he would hold forth on a wide range of subjects.  He gave the impression that teaching was a stop gap before he turned his attention to something more interesting, even though he did it for decades.  He was in fact a dedicated and inspirational teacher.  His Guardian obituary refers to him ‘earning the respect of colleagues and the devotion of pupils’, which is spot on as far as the latter were concerned.

He died in his sleep at the tragically young age of 61, but he was overweight when I knew him and never looked as if he took care of himself.  The coffin was draped in the flag of the 4th International, and his memorial meeting as reported in the Weekly Worker appropriately concluded with the singing of the Internationale.  The last time I saw Alec was in 1976 or early 1977, at a political meeting in London, where I was with people from the University of Kent.  We bumped into each other in the foyer and exchanged a few remarks, then I left to join my friends.  I’m sure many others will have warm memories of him as teacher, historian and political activist.  His influence on me was profound, and I celebrate his memory as he celebrated the memory of Karl Marx that day in October 1968, though in my case not by drinking in two dozen pubs!

Next year marks the 200th anniversary of Marx’s birth, and the 50th anniversary of the famous pub crawl.  It would be nice if someone were to recreate the outing to commemorate both, but particularly Alec’s significant contributions to the cause he served in his own idiosyncratic way.
Posted by Tom Ruffles at 14:19 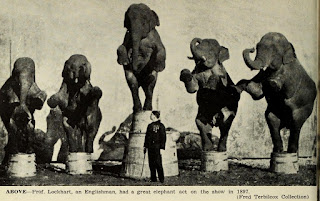 Last week I had the huge privilege of meeting various Pinder/Sanger relatives on a pilgrimage to see family graves at West Norwood and Brockley cemeteries in south London, including that of my great-great-grandparents, Samuel Lockhart (1825-1894) and Hannah Lockhart, née Pinder (1826-1910).  As a result of the meeting I became aware of the book A Ticket to the Circus: A Pictorial History of the Incredible Ringlings, by Charles Philip Fox, published by Branhall House, New York, in 1959.  As the subtitle suggests, this is a history of the Ringling Brothers’ Circus.  It contains a couple of references to Sam and Hannah’s son, and my great-grandfather, Henry James Lockhart, generally known as Harry, who had worked for the Ringlings.  On p. 145 we learn that Harry was a believer in phrenologising elephants:

‘Professor Lockhart, an Englishman who had a trained elephant act on the show in the 1890's wrote:- “Elephants are selected for training when young.  The bumps on their heads are taken into consideration, for the phrenology of the elephant head is a sure index to character. A flat, low narrow head belongs to a vicious low-bred dangerous elephant. On the other hand, well rounded bumps over the eyes, a high forehead, and straight well-set eyes indicate intelligence and docility. Educating an elephant is like educating a child. You must begin training in childhood if you want them to be perfect at maturity. Patience, perseverance, and pluck are needed to train elephants.”’

Harry had been characterised as a great joker by a journalist on the El Paso Herald, so the suspicion naturally arises that he was having a bit of fun by espousing the application of phrenology to elephants, though they certainly have enough bumps to read.  Unfortunately no source for the quotation is given, so we don’t know where or when he wrote it.  The reference to patience, perseverance and pluck though was probably said in all sincerity because Harry would have been conscious of the risks involved in training elephants; his brother George was killed in January 1904, crushed by an elephant at Walthamstow, a year before Harry’s own death.

The book also contains a rather wonderful photograph of Harry dwarfed by five elephants standing on barrels, captioned ‘Prof. Lockhart, an Englishman, had a great elephant act on the show in 1897.’  It’s not to everyone’s taste these days but it must have been a remarkable spectacle.
Posted by Tom Ruffles at 16:59