More Downs than Ups at the American Society for Psychical Research 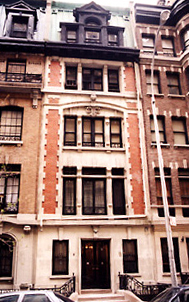 A few days ago I came across an article dated 12 July by Nancy A Ruhling on the Mansion Global property website stating that the fine building occupied by the American Society for Psychical Research (ASPR) at 5 West 73rd Street in New York is up for sale with a hefty price tag of $17.995m.  I put the link on the (British) SPR’s Facebook page and Twitter feed (hereafter SPR refers to the London-based organisation) with the single word ‘worrying’.  I had assumed the meaning was obvious, but the Facebook post was picked up by a message board, generating discussion speculating what the ‘worrying’ signified, with one comment saying the writer assumed the ASPR was defunct; a not unreasonable assumption as it happens.  It seems worth outlining what those worries are, with some of the context.

There have been clear indications that all was not well at the ASPR for some time.  Its Journal had not been published for many years, and no visible services provided for members.  Researchers wishing to use the library – proudly displayed on the Society’s website – were not being granted access, with no reason given.  Emails were not being answered.  I first became aware there might be a problem in 2009 when I was asked – as the person looking after general enquiries to the SPR – if there had been an issue of the ASPR’s Journal published recently.  I have never been a member of the ASPR but when I consulted someone who was, I was told there had not been an issue ‘for a while’.

Having heard more rumours about problems at the ASPR, and deciding to look into the subject in more depth in 2013, I came across a 2007 blog post by George P. Hansen headed ‘A Salary in Parapsychology: Patrice Keane (ASPR).’  It noted that in 2005, payments to the ASPR’s Executive Director, Patrice Keane, totalled $177,297.  This seemed a huge amount for what on the face of it did not seem to be very much work.  Using figures in the ASPR’s own federal tax return, Hansen made some assumptions about the split between the various categories of membership and estimated that the membership in 2005 stood at 23, down from 591 in 1998.  Its flagship publication is (or was) its Journal, a quarterly, and according to Hansen, it appeared regularly until about 1997, when its schedule became erratic.  In July 2007 they posted out an issue, dated January-April 2004, which as far as I am aware was the last.*

What surprised me was the minimal response in 2013 when I put a link to Hansen’s post on the Facebook page of the SPR: two people, both Americans and who can be considered positively inclined towards psychical research, were dismissive of Hansen and implied it was poor taste to have raised the matter of the ASPR’s finances.  It seemed nobody, apart from Hansen, wanted to raise concerns about this venerable institution.  This left me puzzled, and I wondered, given the situation, why ASPR members, or whatever was left of the membership, were not shouting about it.  Clearly the ASPR’s returns were in need of more scrutiny than its members had given them thus far.

Sadly, things have gone further downhill since 2007.  In November 2011 Stacy Horn, most definitely a bona fide researcher, reported difficulties in accessing the ASPR library, having been repeatedly fobbed off over a period of a year and a half.  She could not even find out what was there.  Eventually she gave up, reporting that others had told her similar stories to her own experience.  Her blog post title: ‘What is the deal with the ASPR?’   She is probably still waiting for an answer to that question.  Then Hansen returned to the subject of the ASPR at the 2012 conference of the Academy of Spirituality And Paranormal Studies.  He noted that the ASPR’s assets according to its 1998 IRS Form 990 had stood at $927,428, with compensation to Patrice Keane at $65,600, while in 2010 assets stood at $-1,693,720 and compensation to Keane at $139,955.

The SPR’s Guy Lyon Playfair wrote a Forum piece in Fortean Times in 2014 in which he traced the ASPR’s fluctuating fortunes, its ‘ups and down,’ during its history and decided the organisation was probably now ‘down and out’.  On the other hand, in a rare bright spot Beth A Robertson’s acknowledgements in her 2016 book Science of the Séance included thanks to Jeff Twine of the ASPR (Twine was at one time billed as ‘acting editor’ of the ASPR’s Journal, not a busy role), which suggests she was successful in penetrating the inner sanctum.  I have heard of a couple of other people who have managed to gain access though, as I understand, permission required a great deal of effort to obtain and when granted was cast in the nature of a favour.  Like Horn, others report requests for access, or even information, being ignored.

While one might be forgiven for assuming the ASPR is no longer with us, its very dated-looking website, bearing a 2009 copyright, is still soliciting members, and it has a complex list of tariffs, ranging from ‘Associate’ at $70 p.a., ‘Fellow’ at £100 p.a., ‘Sponsor’ at £2,500, ‘Founder’ status (whatever that means) at $10,000 and ‘Benefactor’ at $50,000+.  Students and seniors are entitled to slight discounts on the basic.  These figures have not changed since at least March 2013, when I first noted them.  There is a PayPal facility, probably the most recent addition to the website, and much talk on the site of tax savings for donors as an incentive to give the Society money.  There are three sample articles by Rhea White from the Journal, the most recent from 1976; and I can find no mention of any ASPR-sponsored lectures or conferences, as was the case when I looked in 2013.  It is unclear what services the ASPR actually provides, and casual visitors to the website might not appreciate how little they are likely to get for their subscription.

The ASPR’s financial situation is illuminating.  The CitizenAudit.org website claims to contain ‘The most comprehensive source of U.S. nonprofit tax data’.  The latest IRS return from the ASPR covers 2017, filed in December 2018, and it shows the ASPR’s ‘officers and directors’ as being: Nancy Sondow (trustee/president), Marie Cooper Janis (trustee/first vice-president), Keith Harary (who was at one time treasurer, trustee), Doris Raymond (trustee/secretary), George Kokoris (treasurer), Barbara Gallagher (trustee) and Patrice Keane (executive director).  The first six received no financial compensation and were listed as working a nominal one hour per week, while the last received $139,955 for a 60-hour week.  Four people were employed in the calendar year, who and doing what is unspecified, though they were paid $48,190 for doing it.

The statement on its activities begins: ‘The ASPR continues to meet the growing need for accurate and relevant information through its research activities, library, and archival resources, public exhibitions, and educational resources and services’, with no evidence of these activities supplied.  Yet while the organisation’s income for the year was a mere $19,900, its total expenses were $1,520,868, among which was the executive director’s generous remuneration and a whacking $898,800 in interest.  Outgoings on everything were higher than one would expect in an organisation with such a low level of activity (despite those 60 hours a week).  Assets were stated to be $1,000,844, though not for much longer, because an eye-watering deficit of -$1,379,089 was recorded.  One might be forgiven for idly pondering on what all the money was spent.

Now the story has taken another turn with the news of the building sale, which is being handled by the prestigious-sounding Sotheby’s International Realty.  The Mansion Global report states: ‘The five-story townhouse, which overlooks the iconic Dakota apartment building on the Upper West Side, has been owned by the American Society Etal since 1966, according to property records.’  The precise nature of the ownership, and who would get what from sale is (like much relating to the ASPR) unclear, but 1966 is a key date.  Chester Carlson, inventor of the Xerox process, served as an ASPR trustee from 1964 to 1968, the year of his death, and helped to fund the purchase of the building in 1966, so presumably he set up a trust.  Unsurprisingly calls by Mansion Global to the ASPR went unanswered but Mr. Sieger of Sotheby’s told it ‘the society is selling the property because “they don’t need so much space anymore.”’  The deficit might also be a factor but it doesn’t do to tell potential purchasers you are strapped for cash.

Returning to the ‘worrying’ comment, my fears about the building sale are various.  First, saying they do not need as much space as before suggests they do not intend to carry out the functions they had at some point in the past, albeit apparently not recently.  Secondly, there is a danger of the surplus from the sale somehow going to wherever income has gone in the past, with little to show for it.  Thirdly, the reference to not needing as much space sets alarm bells ringing because of the library and archives, which could be dispersed on the grounds there is no space for them.  Technically the ASPR could function from a small office to maintain its existence but delivering little in the way of services, while its assets were deployed for expenses.  If the archives and library were liquidated they would be worth a fortune.  In the absence of a specific statement from the ASPR, they should be considered at risk.

Considering how long this situation has been going on there has been an astonishing lack of curiosity expressed, let alone action taken, by those involved in psychical research.  Perhaps a more concerted effort could have prevented this point being reached, but now we have, I do not understand why we hear nothing from the current trustees, or even members: dues for 2017 brought in $2,910 so it still has some left.  I should also have thought the Parapsychological Association, as the professional body for researchers, would take an interest, but they have been quiet as well.  In fact the situation in the years since it was suggested to me that publicising Hansen’s blog post was in poor taste has not changed, indicating a degree of indifference I find strange.  It may be too late for the ASPR as a body dedicated to research and education to regain its former glories, but it seems a shame not to at least ask why its decline has been allowed to happen.

A Spanish-language translation of this post can be found here: https://survivalafterdeath.blogspot.com/2019/07/mas-bajadas-que-subidas-en-la-american.html?fbclid=IwAR0Gufj2oCoAO8t51ifok4o-8B3t-lLpwZazrvJLJ6Su4c0giWGQYfut_dU

*Update 21 July 2019: I have received an email stating that JASPR dated July 2004 was published at some point.  Articles were accepted for publication after 2004, fate unknown.

Beth Robertson, Science of the Séance: Transnational networks and Gendered Bodies in the Study of Psychic Phenomena, 1918-40, Vancouver: UBC Press, 2016.