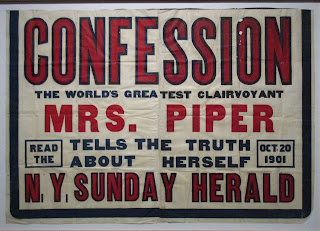 The ‘Wellcome Collection’ in Euston Road, London, is currently running a free exhibition called Smoke and Mirrors: The Psychology of Magic.  Divided into three sections, ‘The Medium’, ‘Misdirection’ and ‘Mentalism’, it considers the connections between stage magic, Spiritualism and psychical research, and how collectively they laid the groundwork for psychologists to study the vagaries of perception, memory and eyewitness testimony.

Members of the Society for Psychical Research were at the forefront of the scientific exploration of ways witnesses can be misled when experiencing séance room phenomena, demonstrating that what participants thought had occurred was often far from the reality.  Magicians also played a role despite the mystical trappings of their acts, frequently using their expertise to expose fraud and distinguishing what they did as entertainment from what mediums often did to convince clients they possessed genuine paranormal abilities.

The Society’s name appears prominently at the start of the exhibition, where a panel, after mentioning Spiritualism, includes the statement that:

‘Alongside this popular interest in spirit communication, the disciplines and institutions of modern science were being founded.  In 1882 the Society for Psychical Research became the first organisation to carry out research into the phenomena witnessed in the séance room.

‘Psychical researchers collaborated with magicians, who drew on their knowledge of conjuring tricks and illusions to test the paranormal claims of mediums.  They laid the foundations for important discoveries about the nature of belief and memory that psychologists still draw on today.’

Another panel, devoted to psychical research, mentions researchers applying ‘rigorous scientific methods to investigate claims of psychic and paranormal phenomena’, including the development of a strict methodological approach to experimentation, and assessing whether natural explanations could be found for phenomena, in terms of psychological mechanisms rather than the paranormal.

There are some wonderful images and artefacts on display, and the SPR has lent the Wellcome a number of items from its archive, looked after by Cambridge University Library.  The objects indicate a balanced approach, neither gullible nor debunking, but demonstrating the intent, as the SPR has always had, ‘to examine without prejudice or prepossession and in a scientific spirit those faculties of man, real or supposed, which appear to be inexplicable on any generally recognised hypothesis.’

There are photographs of Eusapia Palladino during her visit to Cambridge in 1895 when she was investigated by the SPR, and caught cheating.  A fair amount of space is devoted to the medium ‘Margery’ (Mina Crandon), most strikingly a life-sized reproduction of the large box Harry Houdini used to confine her during séances.  Numerous objects have been lent by the Libbet Crandon de Malamud Collection, including the chair she sat on during séances and her lovely kimono.  The SPR supplied photographs, and some book plates with annotated overlays analysing material Margery produced during séances when she was tested in London by the Society, as reproduced in Eric Dingwall’s report in the SPR’s Proceedings, June 1926. 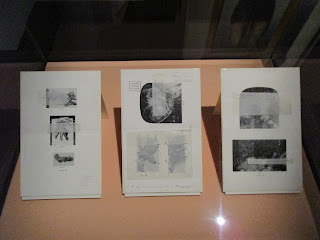 Enlarged SPR photographs show fingerprints in wax taken from sitters to distinguish them from those allegedly left by Mina Crandon’s deceased brother Walter, and wax impressions possibly claimed to be by Walter himself (the ‘Walter’ prints actually matched those of her dentist, Dr Frederick Caldwell, given the pseudonym Kerwin in reports).  A photograph from the SPR shows Margery with a cloud of ‘ectoplasm’ and the bell box which was supposed to be rung by the spirits – though Houdini was convinced Margery herself was responsible.  An investigation kit that belonged to Dingwall was lent by Senate House, where his archive is held in the Harry Price library, but the information card refers to his membership of the SPR.

Another medium, Mrs Piper, is represented by a large poster from 1901 advertising a statement she had given to the New York Herald in which she made what they asserted was a confession that spirits did not communicate through her (‘CONFESSION’ in huge type, followed by ‘The world’s greatest clairvoyant’).  What the poster did not include was her statement to the newspaper not that she was a fraud, but that she thought she was gaining information using telepathy from the living, rather than from discarnate entities.  Shortly afterwards she spoke to the Boston Advertiser to say she did not know whether it was spirits or her subliminal self at work.  The days when interest in mediums could justify billboard posters! 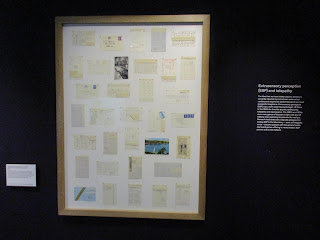 In a section devoted to ESP there is a large frame containing post- and lettercards collected by the SPR resulting from an experiment run on the BBC in 1967.  The backs of ten playing cards were displayed to viewers, who had to guess what was on the front.  This is a sample of the hundreds sent in by members of the public.  The final contribution by the SPR to the exhibition is a set of Telepatha cards from 1939.  These were developed by Harry Price as an alternative to the Zener cards used by J B Rhine, but they did not catch on in the public imagination the way Zener cards had. 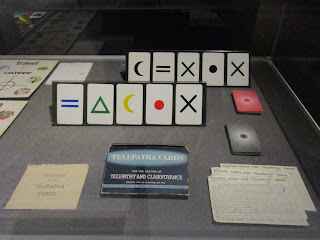 There is a lot more in the exhibition, including a section on recent academic research using magic to examine cognitive processes, and it is fascinating to see a through-line from the early experiments of the SPR to the latest work elucidating how magicians can assist in showing how we make sense – and sometimes fail to make sense – of the world.  The clear implication is that we generally overestimate our ability to spot deception, and those who seek to fool us can call on a wide array of strategies which play on weaknesses in our processing of incoming information, weaknesses of which we are not aware.  We may feel we are in control of our choices, while we are being cued to the desired outcome through the manipulation of our assumptions and the power of suggestion.  The SPR can be proud that it played a pioneering role in such a key aspect of psychology.