The Society for Psychical Research at 140 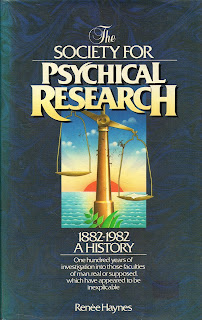 Sunday 20 February 2022 marks the 140th anniversary of the founding of the Society for Psychical Research in 1882 (on a Monday).  It’s not a satisfyingly round number, like a centenary or a sesquicentenary, but it seems worth marking nonetheless.  I’m sure in ten years’ time there will be significant celebrations, as there were in 1982 when there was a big conference at Cambridge, a series of books published by Heinemann on various aspects of psychical research, a collection of essays edited by Ivor Grattan-Guinness, and a history of the SPR written by Renée Haynes.

Grattan-Guinness’s Psychical Research: A Guide to its History, Principles and Practices provides a handy overview of its subject matter as it was viewed in 1982, containing contributions from some eminent names in the field.  One part discusses topics seen to constitute the range of psychical phenomena – mediumship, out-of-body experiences, apparitions, clairvoyance and telepathy, survival after death, poltergeists, psychic healing, precognition, psychokinesis and photography (Kirlian photography would nowadays be excluded) – and these could easily slot into a contemporary book, albeit with developments in experimental methods and theoretical models.

Similarly, a contemporary overview of the relationship of psychical research to other disciplines would look much the same, with changes of emphasis (the section on computers seems quaint when set against their ubiquity now).  This is not to say psychical research has remained static over the last four decades.  Thinking about the way the Society has evolved since 1982, the title of the final chapter in Haynes’s book caught my eye: ‘Achievements. What Next?’  Naturally there is more on past achievements, of which there are many, than future prospects, but while the chapter is rambling, it provides a useful benchmark for measuring the subject’s evolution.

To begin with, Haynes detects an essential continuity, despite swings in intellectual fashions, since the Society was founded.  That is reasonable, as its objects are largely the same as they were in 1882, albeit the means of studying them have evolved.  However, she notes modifications in attitude.  Even by 1982, she felt ‘the pendulum has jolted from an overwhelming interest in mediums and their psychology to an overwhelming interest in the use of mass experiments evaluated by statistical methods’; from scrutiny of environmental and emotional causes of poltergeists to research on meditators and ‘psychokinetically-gifted people’ (the inclusion of emotional in relation to poltergeists is surprising, a pendulum that has swung back); and with the continuing trend towards what Haynes somewhat sniffily characterises as ‘the technology of psi.’

Her assessment of mediumship now seems unduly pessimistic, with a great deal of research being carried out into this and other aspects of the possible survival of consciousness after bodily death.  She does mention super-psi as a view gaining traction, linking it to clairvoyance, the latter to her mind less popular with SPR members in the UK than in other countries, particularly the US and France.  Super-psi is an idea that is posited as an alternative to survival (Stephen Braude is a notable champion), but it is doubtful there are national preferences for clairvoyance.  Final answers on survival she believed were beyond psychical research to determine, a familiar view today.  Technology provides useful tools for the exploration of possible psi processes.

Some elements of serious psychical research she includes in her roundup have since fallen out of fashion, such as metal bending and the Cox minilab.  Others have endured, though methods may have achieved a greater degree of sophistication since 1982.  There is still interest in anthropology (having picked up the label of paranthropology to define its intersection with the paranormal), folklore, biology and historical studies.  Considerable resources have been devoted to precognition research, and much debate generated, over the years.  It is unlikely a modern book on psychical research would devote nearly a page, as Haynes does, to Nostradamus.  On the other hand, the philosophical implications of the nature of time are as strongly debated.

As she was writing a history of the SPR rather than psychical research there is much that is skimmed over, or missing entirely.  Some areas of neglect are surprising – psychic archaeology for example – others less so, because the SPR had little involvement, such as developments in the Soviet Union.  Occult links and the vexed relationship with Spiritualists are passed over probably because of Haynes’s own views.  EVP, dismissed by her as a ‘vogue’, is widely researched, having expanded its scope to encompass ITC.  Out-of-body experiences are present, but not near-death experiences, in 1982 a major omission.  Healing, given a section in Grattan-Guinness’s book, is ignored.  She deals with reincarnation, shortly to become a growth area, in a few lines.  As an indication of the higher profile it now has, and perhaps a degree of patrician disdain, she does not refer to the campaign waged by pseudo-sceptics/counter-advocates, despite the Committee for the Scientific Investigation of Claims of the Paranormal having been formed in 1976.

Moving on to what psychical research has achieved in a hundred years, she notes the formation of similar societies in other countries and the occasional foreign SPR president.  The number of organisations and university departments concerned with psychical research has grown further since then.  Some areas, such as animal migration, she considers to have largely been solved, though not that of ‘psi-trailing’, where an animal can find its way across long distances to owners who may have moved.  There has been further work on anpsi, and the research of Rupert Sheldrake has looked extensively at psychic connections between animals and humans.

Dowsing she feels may have a magnetite component, which would supply a physical explanation, but would not apply, she concedes, to map dowsing.  Little controlled dowsing research has been carried out in the field during the last four decades, and much remains anecdotal, though Elizabeth Mayer’s claim to have recovered her daughter’s stolen harp with the help of map dowsing has been taken by some as evidence for its validity.  Thought transference morphed into telepathy and is studied, unlike Reichenbach phenomena, present in the 1882 Objects, which had vanished from serious consideration long before 1982.  Haynes says she considers psychokinesis proven, both experimentally and from spontaneous cases, and much more work has been carried out subsequently, without universal acceptance of the results.

Psychical researchers took mesmerism and, as hypnosis, cleared away its occult accretions and misinterpretations, and put it on a sound footing, meaning it has largely disappeared from psychical research outside amateur regression sessions.  Apparitions, and haunted places, have shown longevity, being investigated now as they were in 1882 and 1982.  Unfortunately, while there are greater numbers doing the investigating, many take their cue from television rather than the scholarly literature, and despite much ink and ingenious speculation being devoted to the topic, little real progress has been made.

Of hard science, Haynes mentions physics mainly in connection with the observer effect, the strangeness of some of physics’ findings acting as a gateway for strangeness in psychical research.  Awareness of the potential implications has increased enormously, with SPR vice-president Bernard Carr arguing that physics can provide the foundation for an expanded science bringing together matter, mind and spirit into a fuller understanding of the universe and our place within it.  There has been an increased interest in consciousness studies and their philosophical implications since 1982.

Haynes is out of sympathy with laboratory work, questionnaires, and the use of statistics, claiming, in her colourful way, that ‘The processes involved seem to resemble those of plucking, cleaning, and boiling a chicken down for stock.  The end product may be wholesome and nourishing; but nothing characteristic of the original remains, life, colour, shape are gone, regarded as irrelevant.’ (p. 165)  The resulting generalisations and abstractions, in her view, remove the researcher from the raw experiences of individuals.  Doubtless many ploughing laboriously through number-heavy papers in parapsychological journals would agree with her.

Haynes’s greatest fear was that the use of arcane, overtechnical language (‘gobbledygook’ as she terms it) within specialisms might inhibit cross-disciplinary research and lead to ghettoisation of specialists who failed to talk to each other.  Fortunately, it can be said with confidence this danger was averted, with psychical research benefiting from debate that crosses boundaries in the search for answers.  Qualitative methods exploring lived experience are thriving too, which no doubt she would have welcomed, while rolling her eyes at laboratory testing on groups rather than individuals, allowing potential ‘stars’ to slip through the net.

As a means of assessing the current situation, a useful overview has recently been provided by Terje G. Simonsen’s A Short History of (Nearly) Everything Paranormal.  Much would have been familiar to Haynes, including his central idea of the Mental Internet.  Crucially, though, he outlines three main approaches to our relationship to psi, focusing on laboratory, nature and spirituality, the last of the three seeking to comprehend ways in which our everyday existence, including psi, is part of a greater whole.  This issue was not addressed by Haynes, but it has become much more prominent since the publication of her book, as is evidenced by the foundation of organisations like the Scientific and Medical Network and IONS, specifically incorporating a spiritual element into their programmes, and the overlap of psychical research with transpersonal psychology.

It can be said that psychical research has progressed significantly since 1982, but with much still to do.  As for the future, the growth of computing, and specifically the Internet, in the last couple of decades has made an enormous difference to the way the SPR now operates. With electronic communication has come a greater ability to reach out and fulfil a core principle of the SPR’s charitable status, that of education.  Rather than talking mainly to a small group of like-minded individuals, it is now possible to disseminate the data of the SPR, and psychical research generally, in a way not foreseen in 1982.  This has opened up opportunities for cross-fertilisation of ideas that can only be helpful.  Grattan-Guinness’s geographical breakdown has four sections: Britain, Europe, Russia and the Soviet Union, and the United States, as if there was nothing to be said about other regions.  Thanks to the Internet, the conversation can now be global.

Haynes famously coined the term ‘boggle threshold’, and in the introduction to her centenary history (p. ix) defines it as ‘the level above which the mind boggles when faced by some new fact or report or idea.’  Phenomena are judged on a case-by-case basis, and her threshold was fairly high for some, much lower for others.  Evidence will become stronger or weaker, and boggle thresholds rise and fall, as psychical research evolves.  In the process, topics leave the field, as the Reichenbach phenomena did, while others enter it, as methods increase in sophistication even if underfunding remains constant.  In 1982 Haynes concluded with the words, ‘here’s to the next hundred years,’ and to that sentiment one can happily raise a glass.