The Society for Psychical Research at 100: Beyond the Threshold 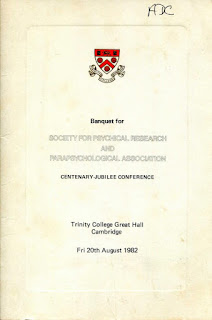 When the Society for Psychical Research reached its centenary in February 1982, the anniversary was marked by a number of events.  Heinemann published a series of books, edited by Brian Inglis; Renée Haynes wrote a history of the Society; and Ivor Grattan-Guinness edited a collection of introductory essays on various aspects of psychical research.  Michael Thalbourne carried out an SPR Centenary Census to which half the membership responded, and the results of which were reported in the Journal of Parapsychology in 1984 and the SPR’s Journal in 1994.

The regular lecture series held at the Kensington Central library was titled the ‘Centenary Year 1982 Lecture Programme’ (as was the custom in grander days, the Presidential Address was given at the Royal Society, as was the Myers Memorial Lecture that year).  In August, a ‘Centenary Jubilee Conference’ took place in Cambridge in conjunction with the Parapsychological Association, including a formal banquet, and the following year an issue of Research in Parapsychology appeared containing conference abstracts and papers.

The BBC broadcast a 45-minute radio programme, Beyond the Threshold, on Radio 4, and thanks to ‘evpman’ it has been uploaded to YouTube.  Presenter June Knox-Mawer traces the history of the Society, setting its origins in the context of loss of faith in Christian dogma, the growth of Spiritualism, and an interest in abilities that exceeded the limits of human senses such as thought transference.  She emphasises its elite membership in the early years, and the investigations of telepathy and survival resulting in such pioneering works as Phantasms of the Living (1886), the ‘Census of Hallucinations’ (1894), and extensive Proceedings.

Knox-Mawer highlights various notable points in the SPR’s history, and there are interviews with senior SPR members.  Historian of the early SPR Alan Gauld, the only participant still with us, talks about the early interest in survival and mentions the sceptical approach exemplified by Frank Podmore, a co-author of Phantasms of the Living.  He draws attention to the tremendous energy expended in the first decades, and particularly the importance of the seminal work on hypnosis.

Arthur Ellison was the president at the time of the broadcast and he discusses the change from mediums as an object of scrutiny to a more collaborative approach (the consequences of which were seen later in the study of the Scole phenomena he undertook with Montague Keen and David Fontana, when the three were criticised for lack of rigour in excluding fraud).  He refers to the Toronto Philip experiment, but curiously neither he nor the other interviewees mentions the Enfield poltergeist case, though both Haynes and Grattan-Guinness include references to it in their books.

Renée Haynes, who joined in the 1940s, talks about the composition of the Society in those days, members sharing a similar outlook grounded in membership of institutions such as the older universities, the Civil Service and the military.  She recounts that when a fellow member said she did not want a person to join because he wasn’t a ‘gentleman’, she meant there was no guarantee he would meet the requisite standards.  In other words, he wasn’t one of us.  When I joined in the late 1980s I found a similar condescending attitude on the part of the Council Old Guard.*  Having known Renée, I’m sure she brought a breezy informality with her from the start.

Brian Inglis notes a divide between those who pursue scientific programmes and those with a more general interest who find articles in the Journal to be too technical and difficult to understand (hence a newsletter was instituted in 1981, to appeal to a broader audience, and this evolved into the current glossy magazine).  He refers to the split which created ASSAP, the Association for the Scientific Study of Anomalous Phenomena (also created in 1981, still thriving, and still with an anti-SPR animus among some members after 40 years), alluding vaguely to ‘internal rows’ as a cause of the schism.  Unfortunately, he is unable to remember what the acronym stands for.

The Hon. Secretary, Anita Gregory, sadly speaking only a couple of years before her untimely death, discusses spontaneous cases and the kinds of approaches the Society receives from the public, not all of them from individuals of sound mind, she claims.  Such requests, she continues, give rise to a conflict between wanting to help and wanting to observe for the sake of research, never an easy issue to resolve (today’s ethical standards would disagree).

Discussing why investigators so often find phenomena have died down, she responds that it can be difficult to know whether there was nothing there in the first place, or whether some subtle effect created by the investigator’s presence inhibits it.  There is evidence the most violent phenomena occur in the early stages of a case, and later on people help things along.  It had been the general rule to stop taking an interest once people were caught cheating, but Gregory believes this is a mistake, as cases are often a mix of genuine and fake.  Gregory was depicted in The Conjuring 2, which was – very loosely – based on the Enfield case.

In answer to the key question of how the SPR would measure its achievements and influence, Haynes claims there is now more knowledge of the subject and acceptance of telepathy.  Gauld argues there is a wider understanding that looking into these matters is not the province of cranks or the credulous.  He makes the bold assertion that if there had been no SPR then there would have been no American SPR, and consequently no Duke University laboratory (where J B Rhine had established an influential parapsychology unit).

Ellison thinks the present moment is a watershed, with greater appreciation among scientists that there is something meriting study.  In particular, he sees an increasing awareness that psychical research has important implications for an understanding of personality.  Optimistically he considers scientific acceptance to be close, with more rapid progress likely as the SPR enters its second century.  There is no sense nearly forty years on that his upbeat assessment has been borne out.

Inglis, who seems to have had an ambivalent attitude towards the SPR, pointing out he had ‘many harsh things to say’ about it, thinks it will cope with new developments, maintaining its high standards and integrity.  The influence of Uri Geller at this time can be gleaned from Inglis’s prediction of psychokinesis as the coming thing because with metal bending one can observe the metal bend, even though, he continues, many in the Society consider Geller to be a fraud.  Like Ellison, Inglis forecasts science and psychical research coming closer together, but with the latter prone to the ‘inkfish effect’ (a term apparently from Arthur Koestler which has not caught on): things go wrong or the desired result fails to occur, thwarting the investigator’s endeavours

Haynes and Gauld both bemoan an increasing focus on technique and the drive to create perfect experiments in the artificial circumstances of the laboratory, with a loss of psychological richness, rather than on what happens in real-life situations: pursuit of the experimental method has for some become an end in itself.  Gauld suspects the founders might feel we had lost the larger question: the experience of people in ordinary situations, rather than in the restricted lab context.  On the other hand, he sees a swing back to an interest in spontaneous phenomena, tackling puzzles that we find in everyday life.  Forty years on, the tension between the experimental and spontaneous is still with us.

*As an example of how little in some respects the SPR’s ‘not one of us’ attitude had changed since its foundation, even beyond its centenary, the January 1997 issue of Uri Geller’s Encounters (subtitled ‘The World’s Most Paranormal Magazine’) carried an article devoted to the SPR.  This contained a reference to an investigation the Anglia Paranormal Research Group, of which I was a member, had conducted at St Botolph’s, a redundant church at Skidbrooke, Lincolnshire, and about which I had written in the SPR’s magazine The Psi Researcher the previous year.

The article also included an interview with Arthur Ellison.  Arthur was very excited about this and brandished a copy at an SPR Council meeting.  He informed the gathering we had kindly been offered a full-page advertisement for the SPR in the magazine gratis.  As the SPR article formed the basis of Uri Geller’s editorial (calling it ‘our major feature on the Society for Psychical Research’) it is entirely possible this gesture came from the man himself.

I thought it a generous offer, and would enable us to reach a large number of potential members, yet there was reluctance by some present to take it up, and after discussion it was decided to decline on the grounds it could attract the ‘wrong’ kind of person, one who failed to conform to our standards (i.e. the typical reader of Uri Geller’s Encounters).  When I had joined a decade earlier it was still a requirement to have two members vouch for an applicant.  Fortunately, such ossified attitudes have faded with the passing of that generation.

Blackmore, Susan J. Beyond the Body: An Investigation of Out-of-the-Body Experiences, London: Heinemann, 1982.

Thalbourne, Michael A. A Glossary of Terms Used in Parapsychology, London: Heinemann, 1982.