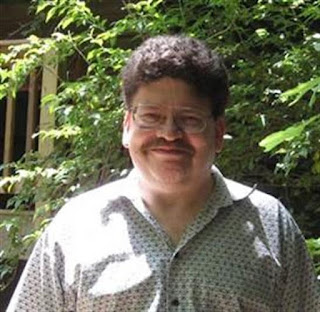 Parapsychologist Dr Carlos Alvarado died on 16 July 2021 after a battle with glioblastoma.  During his illness he was looked after by Dr Nancy Zingrone, his wife and collaborator of nearly 40 years.  I am sure there will be many heartfelt tributes to Carlos as the parapsychological community comes to terms with his untimely death, but I wanted to record my own sadness at the loss of someone I admired greatly, not only for his deep knowledge but for the qualities of his character and dedication to his chosen field.

He pursued a wide range of professional activities, not least serving two terms as president of the Parapsychological Association and a lengthy stint as a research fellow at the Parapsychology Foundation, with which he and Nancy were associated for many years.  He was well known for AZIRE, the Alvarado Zingrone Institute for Research and Education, a foundation he and Nancy set up to be an umbrella for their outreach activities; and the very successful free online courses they organised as ParaMOOC, attracting eminent researchers to give lectures to large and enthusiastic audiences.

Primarily though, Carlos was a scholarly and extremely prolific writer, his work, often in collaboration with other researchers, appearing in numerous publications.  He only wrote one book, Charles Richet: A Nobel Prize Winning Scientist’s Exploration of Psychic Phenomena (2019), but he produced huge numbers of articles.  He took a particular interest in nineteenth- and early-twentieth-century psychical research and its links to psychology (championing a re-evaluation of the key role psychical research played in the development of psychology, which contemporary psychology is keen to airbrush from its history), but he also investigated other parapsychological aspects, such as out-of-body experiences.

That flexibility reflected a concern with over-specialisation in niche topics, to counter which he urged researchers to pursue a general education in all parapsychology’s aspects and encourage an interdisciplinary focus.  Parapsychologists, possessing an overarching understanding, could then step outside their own narrow area of expertise to find relationships, enriching parapsychology as a whole.  The research was only part of the process, however.  Carlos was concerned about the ghettoisation of findings in dedicated journals read only by a few, and he stressed the need for the dissemination and discussion of results as widely as possible.

In terms of communication, he was concerned to highlight how much of the international literature is inaccessible to monoglot English-language speakers, and how the English-language literature is similarly unavailable to those who do not have the necessary skills to read it.  He was keen to disinter neglected literature, in order to provide a more representative history.  But he was far more than an antiquarian: by drawing attention to the richness of the subject he wanted to see if it could provide insights relevant to current research, in an effort to remap the boundaries of science orthodoxy.  To do so would reinforce the notion of parapsychology as ‘edge science’, and possibly suggest practical applications for the extension of human capabilities.

Generous in publicising the work of others, when producing a profile of an individual he would invariably start with a reference to how they had met – and it is fair to say Carlos had met virtually everyone of note in the field.  In that spirit, I should say we met only once, and briefly, in October 1994, when he and Nancy came to the Cambridge University Library for a Society for Psychical Research study day.  Its title was The Archives and Early Literature of Psychical Research: The Cambridge Connection, based around the Society’s archives not long transferred from its office in London, and Carlos gave a talk on ‘Parapsychological Periodicals in Historical Perspective’.  We occasionally exchanged emails in more recent years.

An entry on Carlos appeared in the SPR’s Psi Encyclopedia two days after his death, written by Michael Duggan and James Matlock, with input from Carlos, and is a fitting tribute.  Carlos himself contributed a number of articles to the Psi Encyclopedia in addition to the hundreds he wrote for various journals.  His blog remains an invaluable and accessible resource, containing articles on parapsychological phenomena but so much more, including surveys of historical literature, interviews, bibliographies, organisations, events, and lists of resources.  The blog, which has contributed significantly to my own education, exemplifies his strengths as a synthesiser and promoter, and ably illustrates his profound knowledge and commitment.  Carlos was a parapsychologist to his fingertips, and it can be said with justice that parapsychology in its entirety was his beat.